As part of its Tech & Check Cooperative, the Reporters’ Lab is serving as a hub for automated fact-checking to connect journalists and technologists around the world. The conference gave them an opportunity to demonstrate current projects and discuss the big challenges of automation.

Some highlights of the conference: 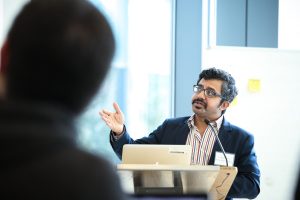 * Eleven demos of past and current projects.  Technologists and computer scientists showed off projects they’ve been developing to either automate fact-checking or improve the flow of accurate information on the internet.

Topics included new tools such as Chequeabot, an automated service that detects factual claims for the Argentinian fact-checker Chequeado; the Bad Idea Factory’s update of the Truth Goggles tool; and the perils of misinformation, including a real-life example from Penn State professor S. Shyam Sundar, whose research project about fake news was inaccurately described in widespread news coverage. 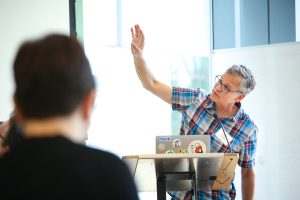 * Two Q&A panels. Alexios Mantzarlis, director of the International Fact-Checking Network, led a discussion with three fact-checkers about the potential tools and processes that could make fact-checking more efficient in the future.

Reporters’ Lab co-director Bill Adair moderated a conversation about challenges in automated fact-checking, including the pitfalls of voice-to-text technology and natural language processing.